There are some places you never get tired of visiting, no matter how many times you go. The Terme di Saturnia Spa Centre is one of them.

If you’re never heard of Saturnia’s hot springs, then condolences.

They are the single most popular tourist attraction in the Tuscan Maremma. They are the face of all the region’s international and national campaigns and Italy’s favourite destination for what they call over here turismo di benessere, which translates into the completely ridiculous word coupling ‘wellness tourism’.

In other words, it’s beloved by the people who adore spending their holidays hopping from hot spring to hot spring.

On Friday, the Terme di Saturnia Spa Centre will be opening its pools for a twilight event as part of Vivamus.

Vivamus is, as you might be able to guess, a celebration of life in the Tuscan Maremma and everything that makes the region such a beautiful place to live.

The festival usually lasts about nine days. We’re right in the thick of it in the Comune di Manciano at the moment, but as incredible as the last few days have been, everyone knows tomorrow night will be the night to remember

You can feel the excitement in the air. And not just the excitement, anticipation too. The Terme di Saturnia are by far the most grandiose location for miles around.

And scattered among the pools are artificial waterfalls, mini jacuzzis and my personal favourite, il fungo, a giant mushroom-shaped water feature that gently rains warm water onto to you. 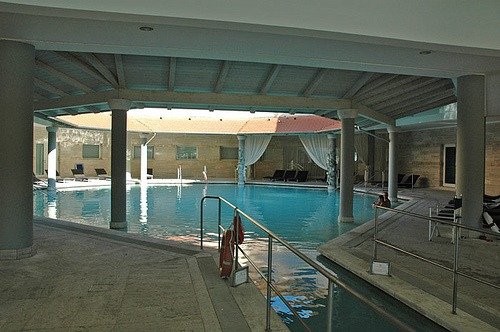 Then for added dramatic effect, there’s the  incredibly bright and airy indoor pool that’s built like a mini Parthenon. Its concave roof has a gaping hole in the middle that lets you gaze into the sky as you soak, but keeps the rain out.

You can only imagine what all of this is going to be like at nighttime. Knowing the spa’s events’ organisers, the entire thing will be lit up with golden torches and floral arrangements.

An incredible live jazz band will provide the background music and the entire thing will be capped off with a fireworks show directly above the pools.

I’ve never been to the spa centre after dark, but I’ve seen the nearby Cascate del Mulino against the night sky and it’s simply enchanting.

Saturnia earns the title of premier hot spring destination because its water flows from the depths of Monte Amiata, a now dormant volcano, at the more-than-delicious temperature of 37°C all year round.

According to the locals, this water cures minor ailments. No one can pin down exactly what does this, but it’s an interesting mix of minerals strong enough to strip anything but pure gold, a strange microscopic creature called thermal plankton and sulphur, which is what gives off the slightly rotten egg smell.

But at night! At night, you won’t be able to drag your eyes away from the steam as it curls into the air. 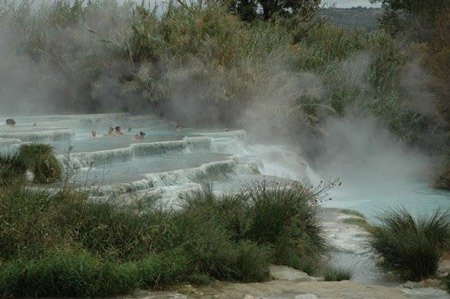 Like everything in the Maremma, Saturnia’s hot springs have a story that is so entralling I remember it off by heart.

The Medieval Tuscans whispered that the steam that rose from Saturnia’s hot springs were proof that the waters were the gates to hell. The story was something they believed wholeheartedly and was shaped from an older myth, a Roman myth, that said Saturnia was the mythical Saturnia Tellus, home of the mighty god Saturn after he was struck from the sky by Jupiter.

The Medieval Tuscans believed one dip in Saturnia’s warm waters and your soul would boil away. You’d then be damned to commit corrupt acts for eternity. 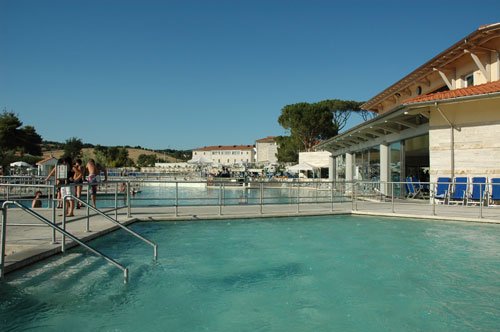 I don’t think you’ll have to worry about that tomorrow tonight though. This leg of Vivamus promises to be a heavenly affair.

The Terme di Saturnia are known for their extravagant and elegant parties. People wait lifetimes to get an invite and tomorrow night everyone is welcome for free.

And the way I see it, if you’re going to be damned, then at least do it in style with plenty of good company!

Vivamus kicks off tomorrow night, 6 July, at the Terme di Saturnia with live music, twilight swimming and fireworks from 6pm

You’ll find the spa centre on the SP10/ Follonata, just before Saturnia.

The hot springs are normally open from 9:30am- 7pm.

But from now until 1 September, they’ll be open for nighttime swimming from 10pm-1am every night, so don’t miss out!