We in the Fiora Valley have been very busy this week celebrating the Vivamus Summer Festival. Yesterday we were in San Martino sul Fiora, where I was lucky enough to experience the classic country spirit that makes the Maremma such a beautiful place to visit.

Vivamus is about putting the best of the Maremma out there for everyone to see. I should know, my husband organised the festival, and I’ve been listening to him describe like this for almost a year!

That said, the festival really is a magnificent way to share with tourists the Maremman way of life. Across nine days, everything from their fantastic food to warm hospitality and LOVE of accordions is shared across all the towns in Manciano and open to everyone.

I’ve enjoyed every day, but last night, San Martino sul Fiora – a picturesque, but tiny little town with a huge spirit – blew me away with their kindness.

In the face of Florence and Siena, San Martino sul Fiora has no grand monuments or chic restaurants. It is a country town through and through, but it’s also humble and you’d be hard pressed to find a place that is a better demonstration of the Tuscany of old. 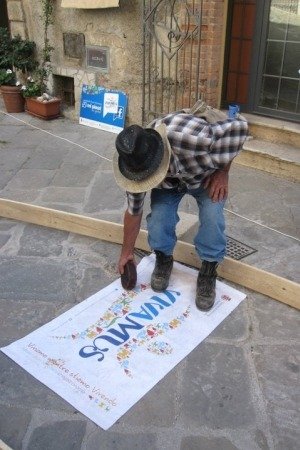 Yesterday’s festival kicked off with a round of ruzzola. Every day of the festival, a different town has hosted a ruzzola competition to select two people to represent them in the municipality finals, which will be held on July 2 in Manciano.

Ruzzola is an ancient game that has been played in the Maremma since the Etruscans. Before Vivamus it was nothing more than a memory for the oldest Maremmani, who fondly remember it with the sort of excitement and pleasure that you’d never get from video games or television. 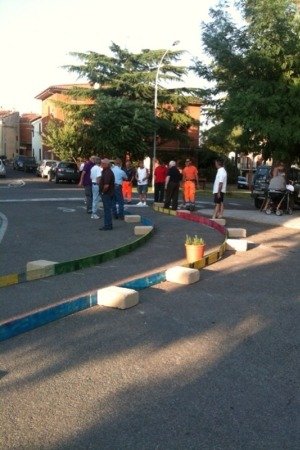 The game itself is a little like mini golf or bowling. A long and winding track is set up in the main piazza. Wooden planks serve as a barrier and a few pots are placed on the edges of the track as obstacles. Each team has two players and they take turns bowling a wooden disk down the track. Each time they bowl, the spot where the disk stops is marked and the player takes their next turn from that spot. The team that gets the furthest after 14 bowls, wins.

It’s a bit confusing, but all you have to know is that it’s incredibly fun to watch and things can get a bit heated when the crowd is cheering you and you make a bad throw.

In the San Martino sul Fiora final, Simone and his teammate were beating his son Matteo and his teammate Diego. Matteo is only 12 and Diego is 14 and the poor things were so upset that they were losing. You could tell how much they really wanted to be in the finals at Manciano to represent their town.

So when it came to the last throw, the two boys were besides themselves. Matteo’s dad only needed to bowl the wooden disk a few centimetres to beat the boys and win the game. The crowd was tense. Everyone was cheering Simone on. So what did he do? He made sure the disk rolled short. The crowd went wild! We all knew he’d lost the game on purpose to let his son win, and both Matteo and Diego tried to convince him to throw it again and win the game. But Simone didn’t. He knew how much the boys wanted to win and let them.

I’d like to think I’m not a sucker for emotional endings, but I was standing there with the silliest grin on my face. When it had sunk in that the boys had won, they were so happy and all their friends came up and congratulated them.

You’re probably rolling your eyes, thinking any father would do that for their son, but I just thought it was a beautiful scene that  just perfectly sums up how giving the Maremmani are and how much they care about their town and their families.

After the game, everyone, local and tourist, was treated to a massive barbecue with bruschette, tortelli filled with spinach and ricotta and dusted with cinnamon, sausages, braised lamb, arancini and plenty of beautiful tarts for dessert.

Everything was prepared for by the locals of San Martino sul Fiora themselves, and the night ended with plenty of traditional music and even a game of tombola or bingo! Sure it was a simple festival, but it was honest and you couldn’t have asked for more.

Click here to watch a video of the ruzzola tournament in action!