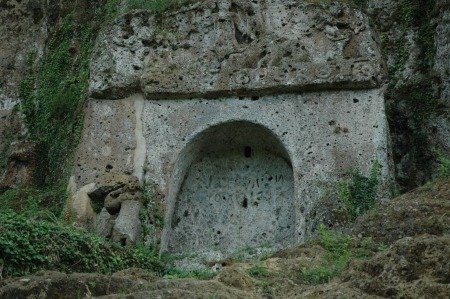 The Citta del Tufo is a nickname that’s often given to Sovana, Sorano and Pitigliano – cities in the Maremma’s Fiora Valley. As well as being indescribably beautiful, these cities are unique because they’ve all been built from tufa rock, which is a special kind of volcanic rock that can easily be carved and dug into.

The Etruscan tombs and temples that are preserved in this archaeological park just outside of Sovana are also made from this tufa rock.

Some are maintained better than others. The ruins inside the Citta del Tufo park are both well preserved and breathtaking. For me, the experience was quite an eye opener, although I ashamedly admit that I knew nothing about the Etruscans before I moved to the Maremma. 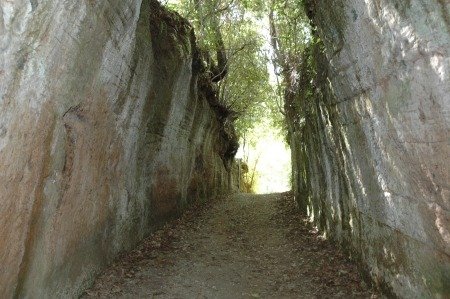 This pre-Roman civilisation lived in Etruria, which is now central Italy, from about the 10th century BCE. They had a fantastic relationship with the Ancient Greeks and learned winemaking and pottery from them. Unfortunately, they didn’t learn how to fight. Instead they were, by most historical accounts, a pretty peaceful civilisation, preferring music and dancing, so you can only imagine how things went when the Romans came in the 2nd century BCE with the express purpose of taking Etruria for themselves…

As a result, much of the Etruscan culture and artistic fervor can only be found in such necropolises as Sovana’s Citta del Tufo. The park is expansive, stretching over raw forest in the middle of the fertile Fiora Valley. In all, there are 11 separate sites. Most are tombs, but there are also Vie Cave (above), which were the highways of Ancient Etruria, carved deeply between tall cliffs of tufa rock.

What immediately struck me about this park was, of course, the sheer age of these Etruscan tombs. You are looking at rock graves that date back to the 8th-7th century BCE! And they are anything but simple and small. 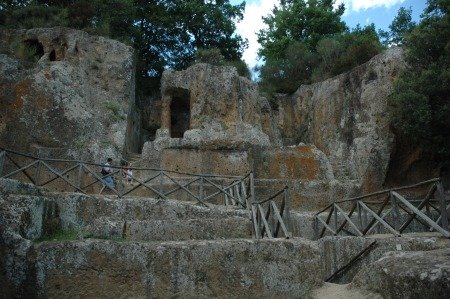 Today only the shell of this hulking building remains, but you can still explore it. Underground, you’ll find the burial chamber itself, complete with the table where the deceased would have been lain among a glut of treasures – urns, gold, jewellery and anything he might have needed in the After Life. 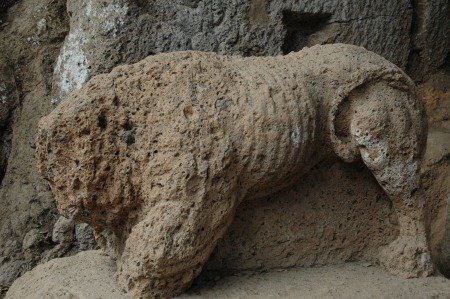 If you’re in Sovana, don’t miss this park. Tickets are €5 or €7 if you want to visit Sovana Orsini Fortress too.

You don’t have to be an expert on ancient history to enjoy the park either. When I visited, it was filled with young families and groups of friends and the kids loved it simply because they were free to interact with the tombs, admire the stone statues up close and walk the Vie Cave just as the Etruscans would have. 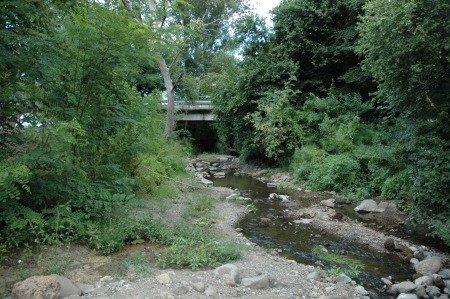 The park itself is also an absolutely beautiful example of the Maremma’s undisturbed natural beauty.  Once you’re inside the noise of the nearby road is non existent. It’s peaceful and green and the canopy of trees protect you from the worst of the summer heat.

The Citta del Tufo Archaeological Park is just outside of Sovana. To find it head for Sovana and when you get there follow the signs for the park in the direction of Santa Fiora. There’s a small carpark just outside the park and next to a river, you can’t miss it. The park is open in summer from 10am to 7pm everyday.