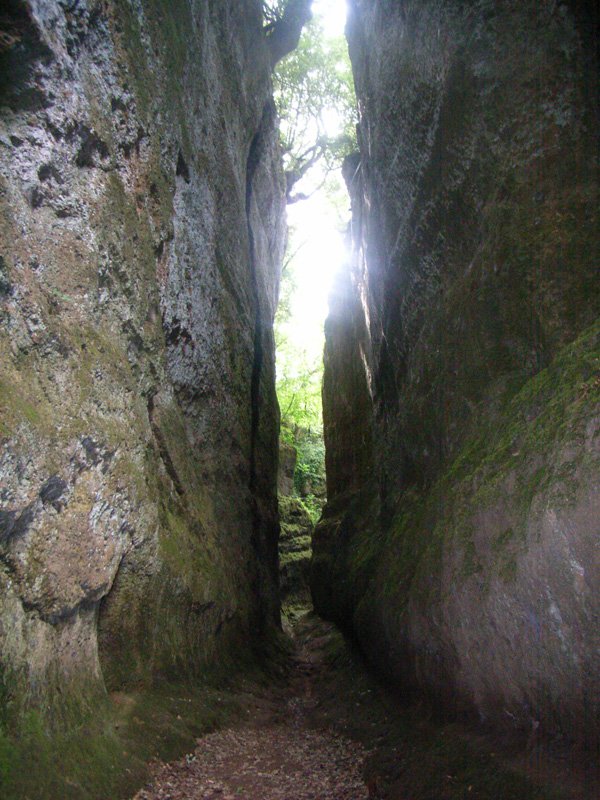 The Vie Cave are an unknown Etruscan creation. These fascinating hiking paths dug into the tufa rock hills have no comparison with other civilisations in the ancient world.

For this reason, we’re not 100% sure about their real function. Were they channels to convey rainwater from the plains to the valleys, simple ways of communication, strategic paths studied to avoid enemies, ceremonial paths or something else?

Within the Archaeological Park Città del Tufo, the Vie Cave of Sorano and Sovana lead the visitor to an Etruscan necropolis. Walking along the paths, between walls of tufa sometimes more than twenty meters high is impossible to describe.

You are immersed in a natural and uncontaminated environment, descending into a magical atmosphere, in contact with the soil and another ancient dimension.

In a landscape characterised by large tufaceous planks engraved by deep valleys, these steep, winding and deeply carved trails were once used by farmers and labours to save time travelling between towns, the cultivated countryside, the necropolises and other settlements. Some of them were used until only a couple of decades ago, when heavy rains made them dangerous.

The Vie Cave were not always so imposing or tall. While tufa rock is easy to carve, it’s likely the original paths were quite shallow, a feat that was easy to achieve without mechanical means. It was in later centuries that the paths grew deeper, eroded by rain and consumed by the hooves of animals (mules, donkeys, horses). The original roads are connected to known Etruscan communication paths, some of which lead to Monte Amiata and funnel off into archaic chamber tombs. At the archaeological park, in particular, you can see interesting carvings on the rock walls, including the Etruscan surname, Vertna.

Travelling along the Vie Cave, you’ll find various types of ferns and, along the narrower trails, the steep walls are entirely covered with mosses and lichens that give an indirect greenish reflection, increasing the beauty of the place.

Vie Cave are scattered throughout the Maremma’s forests, but the best places to see them is at the Archaeological Park Città del Tufo and Pitigliano’s open-air museum.