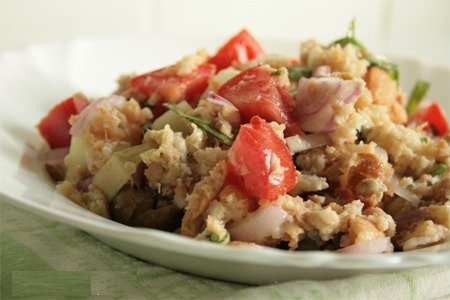 Summer in the Maremma always puts me in the mood for light and fresh dinners. That said, Southern Tuscans never need an excuse to stuff their faces – usually with bread – at the dinner table.

As my father-in-law always says, “La bocca è fatta per mangiare!” or “your mouth is made for eating!” At almost 60, he’s a little plump, but endlessly joyous and never sick, so I’m inclined to agree.

But when it’s so hot that the very idea of a heavy, meat-laden dish makes your stomach want to turn, I, and most Maremmani, retreat to an old family favourite – la panzanella. Panzanella is a traditional Florentine bread salad. You can’t go anywhere in Tuscany without seeing it lovingly made in family homes and less lovingly made in the restaurants that cater to the masses of tourists in the region’s capital.

Of course, the Maremmana version of this classic bread salad differs in two ways. One, they don’t tailor it to foreigner’s tastes, which is often the case at most restaurants in Florence. And two, they always add a handful of extra ingredients that make the salad all the more delicious. This recipe is one of my mother-in-law’s closest guarded secrets. I’m sharing it with her blessing and the solemn promise that I will not let it slip to any of the other mamas in our hometown.

Mama Serafinelli always adds four extra ingredients to her panzanella – tuna, cucumber, hard-boiled eggs and lightly shaved parmesan. I especially love the parmesan in her recipe, as it adds a lovely depth and just a little bit of luxury to this otherwise simple salad.

Panzanella is such a Tuscan staple, yet so easy to make. I implore you to try it while the days are still warm and summery. For a scrumptious dinner, you could serve it with some beautiful proscuitto or ham and a few thick slices of Italian cheeses. 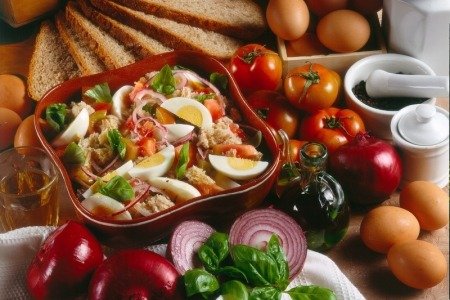 1. Cut the bread into small, bite-sized cubes. Place in a bowl and wet with enough water to soften the bread, but not turn it into mush. Set aside for 15 minutes. Squeeze any excess water out of the bread and place it into a big serving bowl.

2. Add the sliced tomatoes, onions, cucumber, eggs and basil to the bowl. Flake up the tuna and add that too, mixing well. Season with salt and pepper and drizzle with balsamic vinegar and olive oil to taste. Sprinkle over the shaved parmsen. Chill in the refrigerator for at least 30 minutes.

3. Just before you’re ready to serve, take the panzanella out of the fridge and serve it with a mixed antipasto platter of salami, prosciutto, Italian cheese, olives and whatever else you fancy for your Tuscan feast!