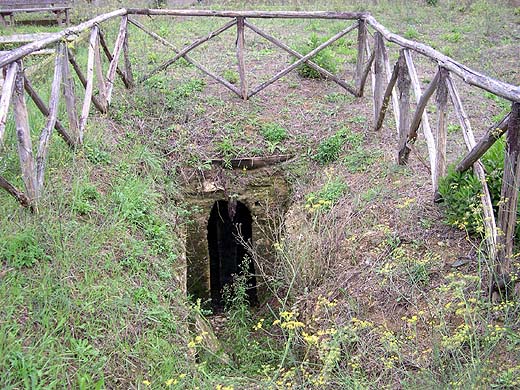 Lovers of Etruscan history and culture are quite truly spoilt for choice in Magliano in Toscana. It’s hard to explore the territory without stumbling across an archaeological site with centuries old cemeteries, underground chamber tombs and ruined villages.

The majority of Magliano in Toscana’s Etruscan settlements were built between the mid-7th and early 6th century BC, before being abandoned a century later.

The main sites are:

Necropoli di Santa Maria in Borraccia: A cemetery with an burial chamber dug into the underground rock and closed with a large stone door that bears bow carvings.

Necropoli del Cancellone I and II: In these elaborate necropolises are large, multi-roomed cemeteries, which, according to historians, belonged to aristocratic Etruscans, who were buried with iron spears, ceramics, bracelets and brooches.

Tomba delle Ficaie: This tomb is closed to visitors, but the museum nearby displays drawings of the large tomb and the sphinx carvings that were found on its walls.

Tomba Sant’Andrea: A tomb cut in limestone and divided over a number of rooms. Along the walls are painted decorations of gigantic winged lions in the natural colours that defined the Etruscan civilisation. The actual tomb is closed to visitors, but a life-size reproduction is on display at the Centro di Documentazione Archeologica di Magliano in Toscana.