How to make the most to your visit in Pisa

We’re usually all about the Maremma on the blog, but today we’re sharing a little love for one of Tuscany’s other famous, but often under appreciated destinations: Pisa. Pisa isn’t the sum of its Leaning Tower. For a fairly small and famous city, it offers a fantastic taste of Northern Tuscan life with plenty of delectable dishes, great sights and a big cultural heart. And while it’s only an hour and 20 minutes from the Maremma’s northern-most city, Follonica, it’s well out of my stomping ground. So I invited fellow expat, blogger and keen photographer, Anna Kay, to share a little love for her city! 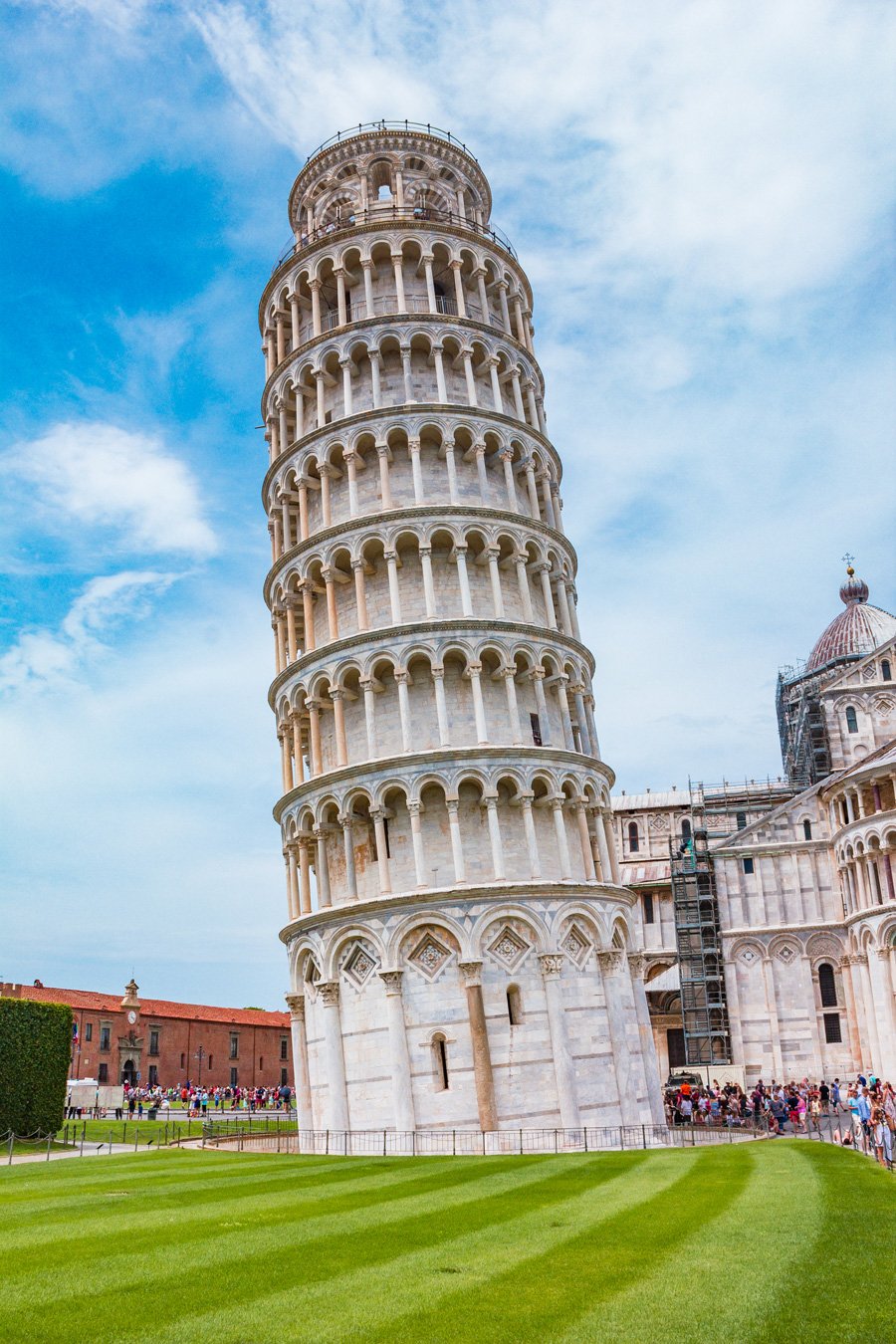 When you think of Pisa, you think of the Leaning Tower, which has spawned numerous epic photos thanks to camera trickery and photoshopping. What you may not know is that this Tuscan city is a sightseeing paradise and just the place for a big blob of coffee foam.

With one of the most sought-after Italian universities, Pisa is a mix of a youthful vibe, centuries-old architectural masterpieces, romantic vistas and unique cuisine.

Make the most of your visit to Pisa with these four memorable experiences:

The Romantic Air of the Arno River 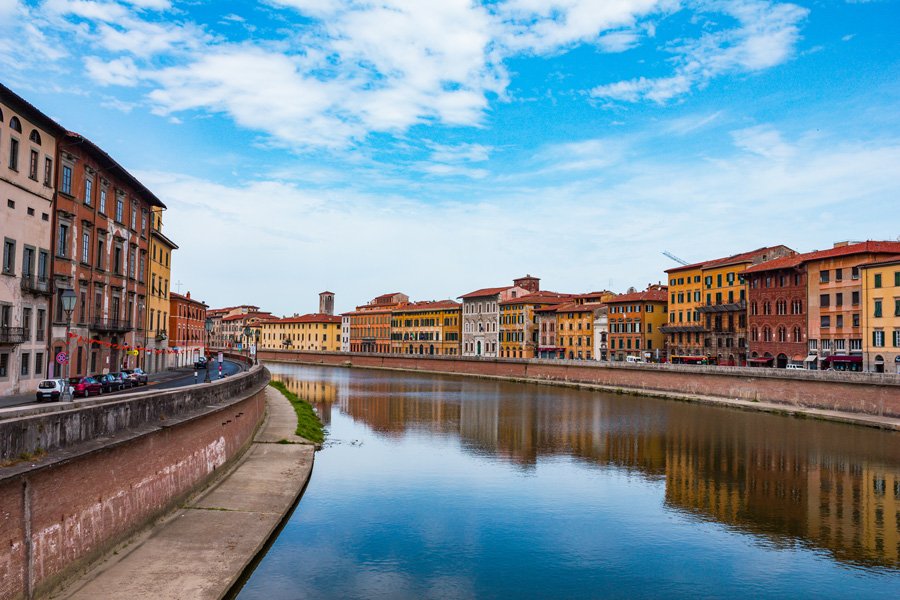 The river Arno, emanating from Florence, cuts through Pisa before emptying into the Ligurian Sea.

Walking along the Arno, flanked by colourful buildings on both sides, you feel like you’re in a different world and almost hope for someone to sweep you off your feet!

One among the structures beside Arno is extra special – the Church of Santa Maria della Spina, whose ornate white facade is unmissable and exquisite even if you don’t really understand architecture that well. Made completely of marble, the Gothic style exterior boasts intricate details and its roof features a number of statues.

Evening is a good time to stroll along this part of Pisa, which lies just outside the city’s historic centre. The Arno shimmers like a sea of gold in the evening light and the reflection of Santa Maria della Spina on the clear waters is one to behold.

The Square of Miracles 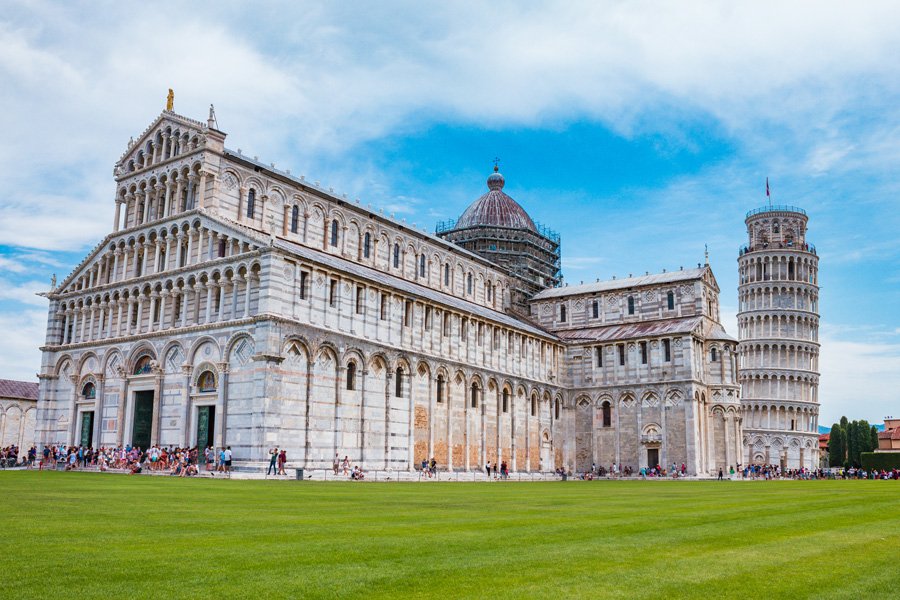 The Miracles’ Square is Pisa’s most significant artistic centre, a UNESCO World Heritage Site, housing one of the most recognized monuments on the planet – the Leaning Tower of Pisa, whose unintended slant continues to fascinate humankind to this day!

The tower has eight floors with small room-like areas that open up on one side (loggia). The eighth floor is the bell chamber sitting on top of the tower, housing seven bells representing each note of the seven-note scale.

The Pisa Cathedral dating to the medieval times is constructed in Romanesque style. Its beautiful exterior features coloured marble decorations and mosaics as well as a number of bronze objects. When you walk in, you are struck by the rich marble interior and the statues depicting nine scenes of the New Testament.

To the front of the Cathedral’s west facade lies the Baptistery of Pisa dedicated to St. John the Baptist. It is the country’s largest baptistery with 12 columns, red tiled vaults and interesting acoustics that create echoes reminiscent of the sounds of an organ.

The Monumental Cemetery of Pisa or Camposanto dating to 1277 housed the coffins (sarcophagi) of the city’s aristocratic people until the 18th century. It is constructed as a cathedral with Gothic-style windows and a central open-air courtyard.

The interior is decorated with frescoes, most notably The Drunkenness of Noah by Renaissance painter Benozzo Gozzoli and Triumph of Death, a painting centred around death. Depicting skeletons, snakes, corpses, tombs and humans encountering deathly symbols, the painting’s narrative is simultaneously depressing and fascinating.

The Square of Miracles will indeed transport you to a different era; its white marble buildings set against the immaculate green grass will make you forget the urban bustle surrounding this incredible place.

Shopping and Culture at Corso Italia 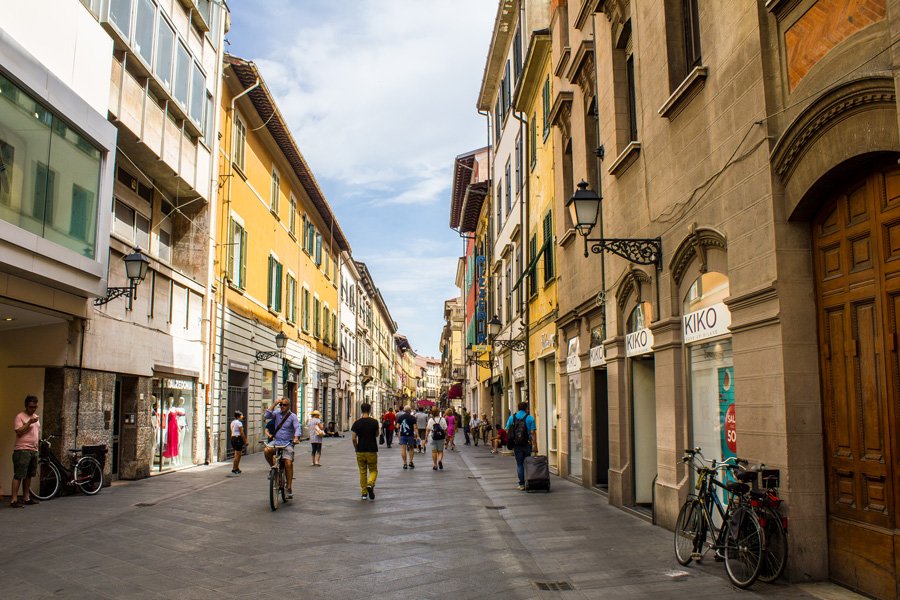 Corso Italia is Pisa’s high street, full of shops, restaurants, coffee bars and noble palaces. If you’re looking to pick up trinkets, you’ll be happy with the pretty extensive choice of jewellers throughout the street.

Clothes, handcrafted cosmetics, perfumes, comics, shoes, video games and related gear/accessories, souvenirs and decor items, lingerie… you can shop till you drop. The good news is that the street has a mix of expensive boutiques and budget shops, so you can have a pizza lunch and shop a bit without losing your shirt.

If you don’t intend to shop, take in the lively atmosphere of the street and pause before the noble palaces as you continue further towards the Arno river. Most famous among them is Logge dei Banchi dating to the 17th century, which was once a prison, and in its subsequent avatars, wool and silk market, and then a food market.

It is in Corso Italia where Pisa’s social life happens and where you can observe the locals as they grab a quick espresso and exchange the gossips of the day. 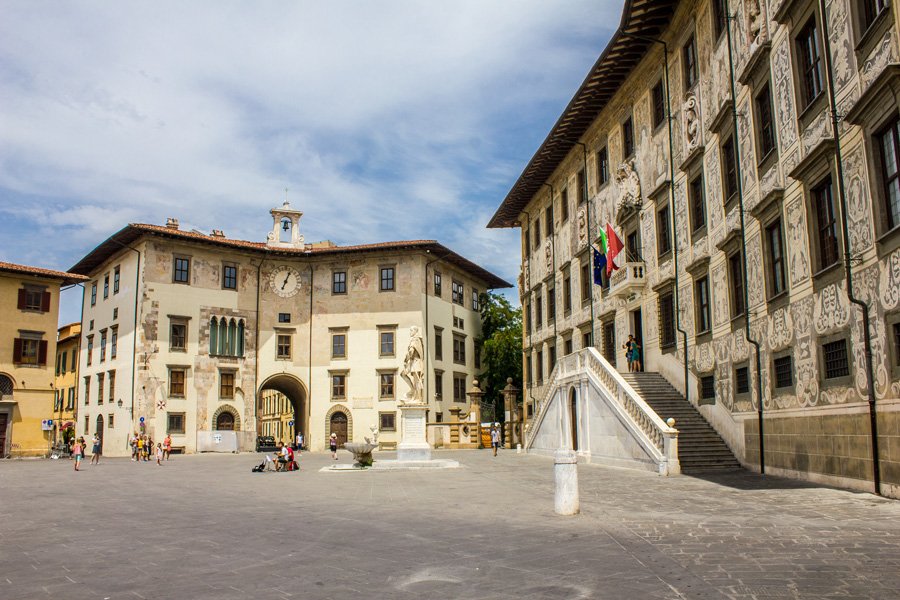 There is no clarity on who founded Pisa, but it is a recognized fact that it existed many years before the Roman Empire. The city was originally a commercial centre and then served as a port during wars. Through the Middle Ages, Pisa retained its power as a military and commercial hub. With the end of the war and beginning of civilized society, its reputation as an architectural and religious centre grew.

Pisa’s medieval history is richly depicted in the city’s main square, the Piazza dei Cavalieri or Knights’ Square. One of the country’s important landmarks, Piazza dei Cavalieri accommodates the palace of the Knights of St. Stephen featuring the busts of Tuscany’s grand dukes.

In one corner of the square stands the beautiful Palazzo dell’Orologio. If you’re familiar with Dante Alighieri’s epic poem The Divine Comedy, you may recognize it as the tower where the demise of Ugolino della Gherardesca unfolded.

The square also houses the Santo Stefano dei Cavalieri, Pisa’s lone Renaissance style church containing Turkish naval banners, the spoils of war between the Knights and Ottoman forces back in 1571.

While Pisa is an all-season destination, you may want to schedule your trip during mid-June when – as part of the Luminara di San Ranieri festival – all the city’s monuments are illuminated with 70,000 candles and a fantastic fireworks display lights up the night sky. If you’re interested in a budget trip, spring and winter are ideal times to visit for the cheap prices and quietude.

Anna Kay is an avid traveler and photographer, editor and social media manager at MedCruiseGuide.com.