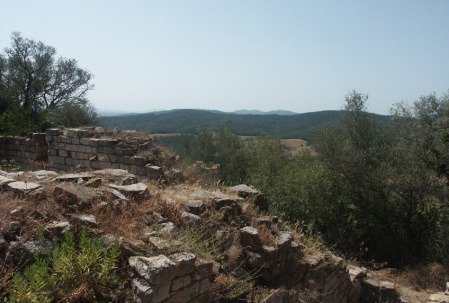 Castel di Pietra is to the north-east of Gavorrano. It’s part of the Parco Tecnologico Archeologico Delle Colline Metallifere Grossetane, so if you’re trying to find it, you can always drop into Gavorrano’s tourist information centre in Piazza Buozzi or visit the park’s website.

Small communities have lived in the caves around the countryside since prehistoric times. But the first mention of the castle itself dates back to 1067, when it belonged to the Sestigna and the Aldobrandeschi.

In 1203, Gavorrano’s rulers wanted to prevent the transit of Grossetano salt that did not come from either the Aldobrandeschi or Sienese stores. Soldiers were positioned at the Castello di Pietro to control the road between the salt plains and Grosseto.

In the 13th century, the castle became the home of the ruling Pannocchieschi family before passing to the Municipality of Massa in 1328 after the death of Nello Pannocchieschi.

In the following centuries, plenty of other prominent families coveted Gavorrano with its rich mines, and endless battles were fought around the castle. The death toll was high and human remains dating from this period have been found around the castle. 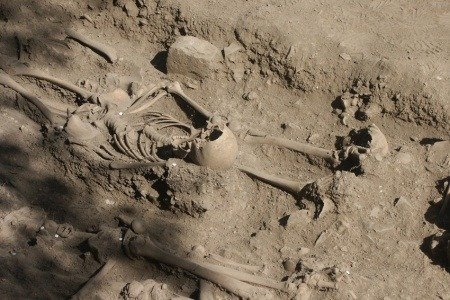 But for most, the Castel di Pietro is the stuff of legends rather than the stuff of history. Locals believe Pia dei Tolomei jumped (or was pushed) to her death here. Pia was said to be the wife of Nello Pannocchieschi, who they say wanted to marry Margaret Aldobrandeschi and cement his power as a ruling lord.

The legend was woven by Dante Alighieri, who included it in the Divina Commedia. His words are celebrated at the annual Salto della Contessa festival.

In Gavorrano, you’ll find the Centro di Documentazione di Davide Manni museum, which recreates the legend. The museum also displays drawings and other artifacts which depict or were taken from the castle. 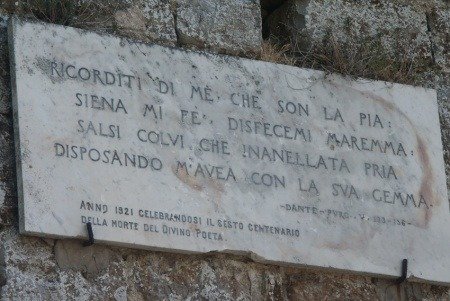 On one of the castle walls is a plaque (above). I find the verse so enchanting, I’ve translated it for you. They are the words of Pia as written by Dante Alighieri:

“A third spirit, followed on the second:
‘Ah, when you return to the world,
and are rested after your long journey,
remember me who am La Pia:
Siena made me: Maremma undid me:
he knows, who having first pledged himself to me, wed me with his ring.”
(Purgatorio, V, 130-136)