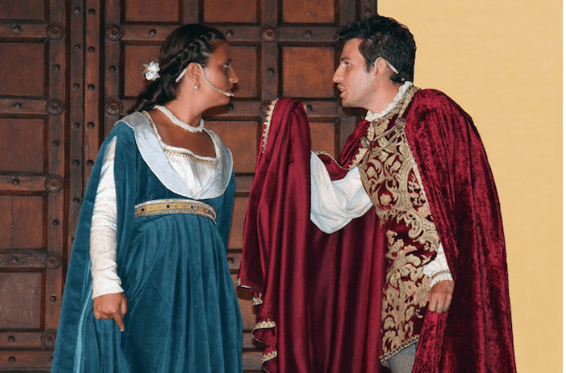 One of the most unusual festivals in the Maremma Tuscany, the Salto della Contessa reconstructs the legendary death of Pia dei Tolomei, as told by Dante Alighieri in La Divina Commedia.

Centuries ago, the young Pia was kidnapped and locked up in the Castello di Pietra in Gavorrano. In the story, she falls to her death from its highest tower at the hands of, according to Dante, her own husband, a nobleman named Nello, who wanted to marry local powerhouse Margaret Aldobrandeschi.

The festival begins with the division of the town. One half sides with the Pannocchieschi family of Nello in red and gold, while the other chooses the Tolemei of Pia in silver and blue.

Every person who lives in Gavorrano has a surprisingly convincing medieval costume just this day. First there is a feast of traditional Maremman cuisine and medieval table manners. There is even medieval music and dancing.

After the feast, the town gathers to reenact the play (the role of Pia is always highly coveted). The festival ends just before dusk with the brutal death of Pia, who is dragged by two guards to the highest tower of Gavorrano and thrown into the darkness.

It’s not often that you get to see the words of Dante and local legend come alive so faithfully and vibrantly. Plus the food is great and the party atmosphere addictive!

For more info and some great photos of the festival check out the Pro Loco of Gavorrano webpage.