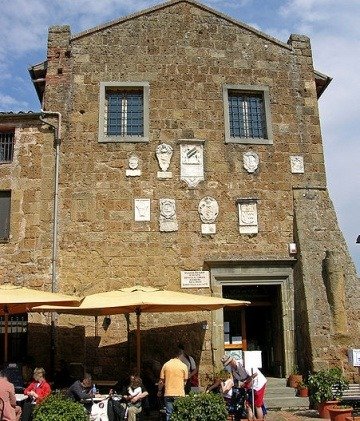 Located in Sovana‘s main piazza, the Piazza del Pretorio, this building can only be admired from the outside.

To be honest, the interior is now homes, office and a great cafe, but the outside is still beautiful to behold. And the cafe, if you get a chance, really is fantastic. They make great sandwiches.

But back to the palazzo, built in 12th-13th century and renovated in the 15th century, it is crowned by the grand, sculpted crests of the various Captains of Justice that controlled Sovana from the 14th century to the 16th century.

Each captain had a different insignia that represented both himself and his family titles and each crest is a bit bigger than the one that came before, which I think is hilarious. There was quite a bit of friendly competition between the different captains.

The palazzo is also the visitor’s centre for the Parco Archeologico Città del Tufo. In here, you’ll find information and maps to help you explore what is otherwise a pretty impossible-to-explore open-air museum.

The guides who work here will also be able to tell you what’s open, what’s currently being restored, and what you simply can’t miss.