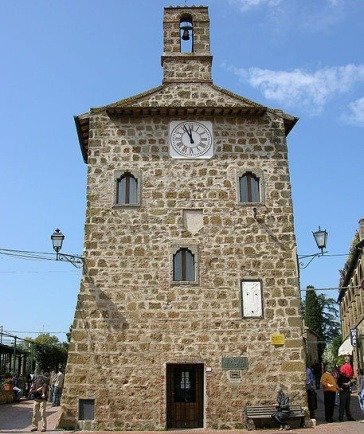 The last and most beautiful tufo rock building in the trinity that make up Sovana‘s Piazza Pretorio.

The only difference between this one and the Palazzo Pretorio and Loggia del Capitano, is that this one was also the municipal seat in the 12th century.

The structure suffered serious damage during the siege. When it was rebuilt, designers added the clock, followed by a bell tower in the 17th century.

With the shift in power that also came during this time, the municipal seat was moved and building became the town’s archive, which is why it’s also often called the Palazzo dell’Archivio.

Today, the entire facade is covered in a gorgeously coloured tufo rock. On the first and second floor are ornate windows surrounded by beautifully carved timber frames.

As far as I know, this palazzo is still the town’s archive and is therefore closed to the public. But there is still plenty to see on the exterior.

The clock is particularly beautiful because it’s one of the few working clocks remaining from this period in the territory.