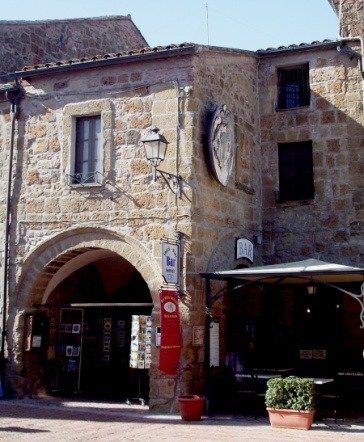 Next door to the Palazzo Pretorio, the Loggia del Capitano is not only aesthetically pleasing. It also holds an important place in Sovana‘s history.

The structure was built in the Middle Ages and completely renovated during the 15th century at the same time as the Palazzo Pretorio.

It was the illustrious home of the Captains of Justice from this time, right up until the end of the 16th century.

While their name might sound superhero-like, the Captains of Justice weren’t saving Sovana from evil. Instead they were more like a very prestigious police unit made up of only the oldest and noblest families.

Their lodge was therefore fittingly luxurious and designed with only the best local building materials, mainly a sand-coloured tufo rock. It also stretches across two very ample levels.

The white coat of arms you see on the side of the building, and in the above picture, belongs to the Medici. The building’s renovators were forced to add it in the 15th century at the request of Cosimo I de’Medici. He wanted to make sure the captains knew exactly who was in charge.

Today, the lodge doubles as the town’s only souvenir store. Definitely worth a wander inside just to see the ornate design work on the walls and the exposed beams on the roof.