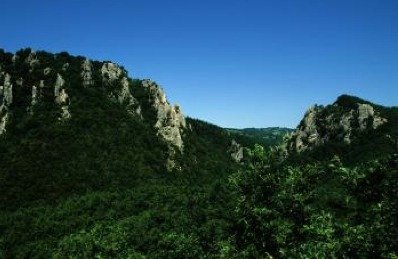 The Bosco dei Rocconi Nature Reserve is easily one of the most beautiful and diverse parks in Tuscany. Half of it (130ha) is owned by the WWF, who established an oasis of the same name. The other half is owned by the Tuscan community and open to be explored almost all year round.

The nature park stretches across the banks of the Albegna River and covers territory in both Roccalbegna and Semproniano. Its territory is wild and ruggard, punctuated by deep gorges and several caves just waiting to be discovered by an intrepid traveller.

But what really separates Bosco dei Rocconi Nature Park from other parks is the incredible sense of openness you get when you look out onto the never ending stretches of untouched landscape.

Geologists will have a field day among the shales and limestone formations. Nature lovers will get a kick out of the magnificent scenery filled with oaks, maples, hackberries, ash and no less than 28 species of orchids. Bird watchers could lose hours watching the woodpeckers, kingfishes, jays and falcons, not mention snakes, butterflies and other animal species. And everyone in between won’t be able to resist the simple tranquility of the entire nature reserve.

It truly is something not to be missed, regardless of whether you have a nature-specific hobby or just want to walk through the epitome of Tuscan countryside – an area that is so beautiful and serene it’s impossible not to feel a little bit jealous of the locals who get to enjoy it everyday.

Entry into the reserve is just outside Semproniano. If you’re little lost, pop into the tourist centre in town and they’ll tell you where to go.