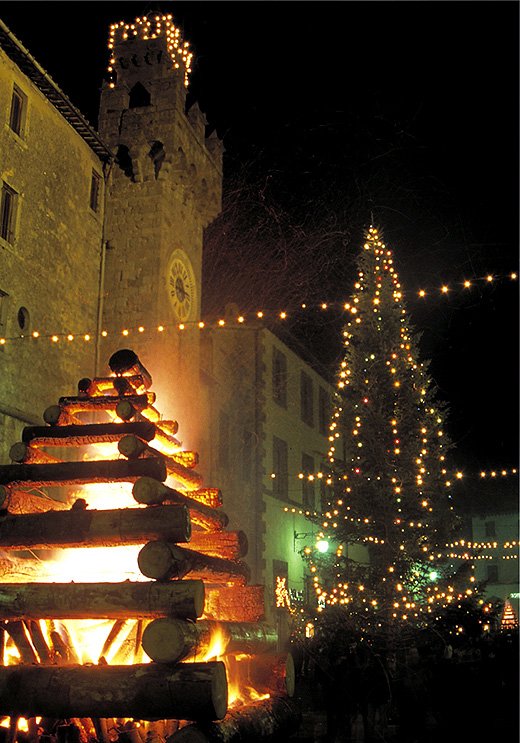 There is nothing quite like this event. An ancient fire ritual, it’s a symbolic celebration held on the eve of the birthday of St Caterina di Alessandria – the patron saint of Roccalbegna.

The night begins with a procession. Every able-bodied  person in Roccalbegna leaves the comfort of their homes to walk the chilly winter streets led by the parish priest. The procession stops on the highest hill of the town, where the priest blesses a small pile of wood that has been arranged around a long wooden pole known as the ‘stollo’.

After a short mass, the pile of wood is set alight, commemorating the burned-at-the-stake death of St Caterina. The fire lights up the dark countryside with red flames and the effect is startling (and just a bit frightening).

Once the flames have died down, the main event of the night and the event the entire town has been waiting for, can commence –  the palio.

A ‘palio’ is a banner or cloth won during some type of ancient race or contest, in this case, a race of courage and skill where participants compete to be the first to steal the stollo, which sits at the heart of the still burning and smoking fire. The town is divided into the district they come from and every competitor must brave the smoke and heat, grab the stollo and bring it back to their part of town.

Blinded by smoke and blackened by fire, the locals run around the streets clinging to pieces of wood. It’s an eerie,  but incredible race that left me speechless. At the end of the night, the winning team hands over their piece of the stollo, which is no more than a cinder, to the parish priest. The cinder is burnt and the ashes scattered throughout the countryside as a good luck charm for the following year’s harvest.

This festival truly transports you back to the Middle Ages. They have being performing this same ritual in Roccalbegna for centuries and to be privy to something like this is beyond words. Just make sure you wrap up tight and drink plenty of coffee. The festivities usually run well into the early morning and you don’t want to miss a minute!