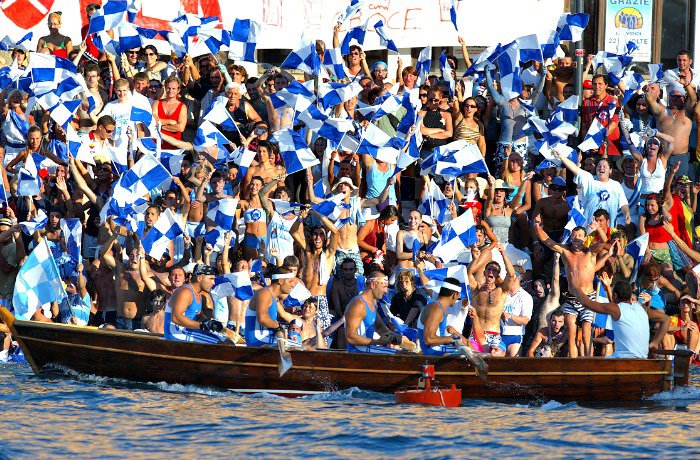 While Porto Santo Stefano and Monte Argentario host are range of cultural and religious-themed events throughout the year, none of them are quite like the Palio Marinaro.

A palio is a cloth or banner that is presented to the winner of a race, in this case, a boat race. This palio has been run in Porto Santo Stefano since 1937.

It pits four boats, one to represent each ancient quartiere (district) of Porto Santo Stefano, against each other.

The four districts, Croce, Fortezza, Pilarella and Valle, each have their own vibrant colours. Each team’s four rowers and one helmsman are meant to come from the districts they race for, although this isn’t strictly adhered to.

Porto Santo Stefano’s palio has ancient roots and was thought to have started as a way for the local fishermen to practise escaping the nasty pirates they often encountered out at sea.

Each year, the Palio Marinaro dell’Argentario draws thousands of visitors. Months of training and an immense amount of skill goes into rowing these boats, and the race itself is taken very seriously.

The entire town comes alive with the colours of the districts and the stands set up along the side of the race course are absolutely packed to the brim with people cheering on their team.

In the typical Maremman way, nothing is done in halves. Before and after the palio, there is music and food, cover bands and dancing.

Porto Santo Stefano is simply buzzing with an infectious energy and frivolity during this event. The palio is a cultural and historical affair that truly cannot be missed.

For more info: check out the official palio website