Built in the 17th century, rebuilt in 1741 and again in 1950, this battle-worn church is a little worse for wear, but it’s home to a beautiful statue of Porto Santo Stefano‘s patron saint, St Stephan by Emilio Greco.

The main facade of the church overlooks Via XX Settembre. It has four large blocks of stone pilasters on either side and a soaring spire, which is topped with the marble coat of arms of Bishop Paolo Galeazzi. At the center of the prospectus is a large portal with a shallow embrasure with a round arch.

The other facade of the church faces out to sea and ends with three large cusps. Here, beneath the lancet window and above the door, is an inscription that commemorates the proclamation of the Dogma of the Assumption of Mary. It reads:

“Come worship as it was defined by the dogma of faith, according to which the Blessed Virgin Mary Mother of God was assumed into Heaven body and soul. “

Along the left side of the church is the bell tower, which guards the old church bells. 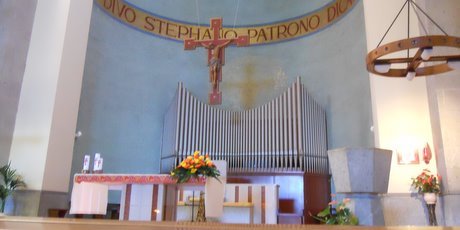 Inside, the wide nave is incredibly fresh and white, like the sea the church looks out on to.

The purity of the white walls is only broken by a series of blind arches supported by massive pillars of stone blocks. Light pours into the church through gorgeous stained glass windows. These windows depict the patron saint of Porto Santo Stefano and the saints tied to the Argentario and Tuscany.

In the last part of the nave, beneath the large semicircular apse decorated with blue mosaics, is the presbytery, rebuilt in 2006. Keep an eye out for the beautiful organ, which was made in 1963 by local craftsmen and baths the room in its imposing shadow.