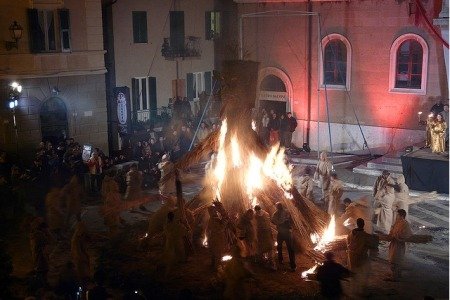 This event might be an internationally acclaimed festival that draws hundreds of tourists every year, but its roots are firmly placed in the centuries when the Etruscans called Pitigliano home.

The Torciata di San Giuseppe is held on the streets and vias around the city’s main square. It begins with a parade as the men of the town, dressed in the traditional clothing – a white long tunic, brown pants, hood and boots – walk through the streets carrying fiery cane rods on their shoulders.

The fire is destined for the giant straw and timber voodoo-like doll, known as the “Invernacciu”. Thanks to its wooden and straw nature, the puppet immediately burns into ashes and represents the end of winter.

In the morning after the festival, the women of the village gather the ashes and throw them into the fields to bring good luck to the year’s harvest.

In the Middle Ages, the festival was dedicated to San Giuseppe – patron saint of Pitigliano, but it has a very old and very pagan feel about it. While tourists are more than welcome, this event is still very much a symbolic celebration for the locals. They hold the ritual very close to their hearts and take it very seriously.

It’s not so much a party in the sense of other Maremman festivals, but more of a solemn procession that just happens to be incredibly evocative as the fiery lights make their way through the otherwise pitch black city.

Only after this ritual is performed, can the locals party, and they sure know how to party. Over the next few days, the city explodes in colour, almost as if it has been cleansed by the burning of the puppet. There’s plenty of music, entertainment, wine and, of course, food. Save some room for the ‘Pancakes for St. Joseph – they’re a traditional sweet made especially for this event.