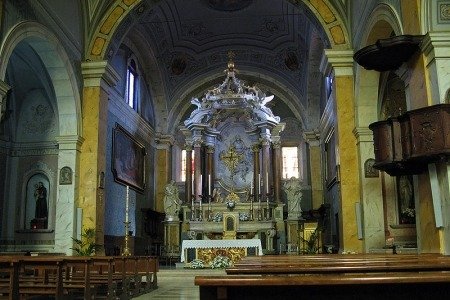 The cathedral was first mentioned in 1061 as part of Pitigliano’s very vast parish. It was renovated several times after that, but none were as heavy handed as Nicholas III Orsini.

After the bishop of Sovana came to reside permanently in Pitigliano in the 19th century, the former collegiate became a cathedral.

Today’s facade reflects many of the magnificent changes that were made to ensure the church was worthy of being called a cathedral. There’s quite a bit of very old stucco work depicting cherubs holding up crosses and banners. The two niches above the door are home to travetine statues of St Paul, on the right, and St Peter, on the left.

Higher up, the facade is gabled with a truly breathtaking Carrara marble bas-relief of the Assumption of Mary with St. Rocco and St. Francis.

The cathedral’s faithful side kick for more than two centuries, its bell tower, was originally used for military and civilian activities.

Now, there are plenty of locals who don’t like the interior of Pitigliano’s Duomo. Most say the design is too ostentatious for their simple countryside, but you have to remember that Pitigliano was one of the few diocese’s in the area to have its own sanctioned cathedral.

So they made sure to build upon the luxurious interior that had been first added by the Orsini in the 16th century, and they didn’t disappoint.

When you step inside, you really don’t know where to look. Gold and cream marble, flecked with green, covers every surface and winds its way to the roof, where it creates an intricate geometric pattern.

The first altar to your right has the cathedral’s premier artistic treasure – a 19th century depiction of St. Paul of the Cross preaching to the sinners who were evangelized in the area.

Next to him is a copy of another striking painting, this time of St. Michael the Archangel and the souls in Purgatory by 18th century painter Francesco Zuccarelli. The original is now in the Museo del Palazzo Orsini.

On either side of the altar are two Baroque stucco statues representing Faith and Charity. Behind them is another large stucco image, this time of St. Peter in all his glory, while at his sides are two large works by beloved local 19th century painter Pietro Aldi.

On your left is another chapel, this time dedicated to St Gregory VII. Again the stucco statues are kept company by a painting depicting the Holy Family by 20th century painter Francesco Ciacci.

Here you’ll also find what I think is the cathedral’s most beautiful treasure – a timber baptismal font carved in the 18th century and depicting the baptism of Jesus with St. John the Baptist in the desert on one side and St. John with a lamb on the other.

Pitigliano’s Duomo is renowned for the beauty of its parts, rather than its whole. All the artworks here are simply gorgeous masterpieces.

Together they might be a little affronting, but you’ve really got to get up close. And when you do, the stunning detail work will leave you speechless.