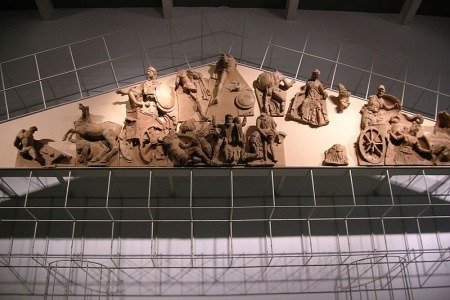 The Frontone di Talamone is a terracotta relief depicting the myth Seven against Thebes, which tells of the dramatic climax of the war between Eteocles and Polynices, sons of Oedipus and Jocasta.

In the relief, you can see Adrastus on a cart moving away from the battlefield, blind Oedipus among the bodies of his dead sons, Capaneus about to fall from the ladder as he tries to climb the walls of Thebes, and Amphiaraus sinking into hell.

The relief itself was part of the largest terracotta fronton discovered in this area and dates back to the 2nd century BC. It originally adorned an Etruscan temple called the Tempio di Talamonaccio, which stood on a hill in nearby Talamone.

It was discovered in the 19th century and was brought to Orbetello simply because it was the biggest city in the area.

The relief is so important that it’s often loaned to other museums around Italy and the world. It’s currently on display in the Polveriera Guzmán as part of the archaeological museum.

To be honest, I can’t believe that Orbetello has managed to hold onto this incredible Etruscan treasure for so long. It is, after all, the only one of its kind in the world, and is still in pretty good condition, which is impressive if you consider how old it is. The emotions on the faces of the carved figures is magnificent.