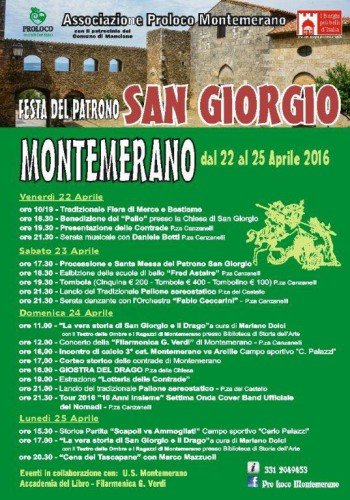 A musical festival that celebrates the patron saint of Montemerano in the best way possible – with plenty of delicious local delicacies, exuberant dancing and fascinating arts and crafts.

The festivities kick off with a parade of the various noble and powerful characters who made Montemerano a free city in the Middle Ages. Just so you know, this isn’t some half hearted dress up party. When you decide to live in Montemerano, you promise to participate in every one of their festivals.

Only old age keeps the Montemeranesi from dressing up in medieval costume to celebrate. Everyone has their own costume that they pull out especially for days like these. They’re even assigned roles based on their professions or, at times, intelligence!

As the noisy and colourful parade makes it way to the centre of town, the Piazza del Castello, the king and queen gather with the other noble families to formally open the festivities. They do this by launching a gigantic handmade balloon into the air. This is a tradition that I’ve only ever seen in Montemerano and isn’t always successful.

There are only a few families left that specialise in making this hot air balloon. They spend weeks gluing the delicate squares of paper together, coating them in a special lacquer and ensuring they dry flat. Then all their hard work is put to the test when specially trained locals light the fire underneath the balloon and (hopefully) launch it into the air. The better the balloon flies, the better the festival will be.

After a night of hard partying, the festival takes a solemn turn with a morning mass dedicated to San Giorgio himself and performed by the local bishop. Residents are meant to spend the rest of the day reflecting on their sins and renewing connections with their family.

On the third day of the festival, things kick into gear again and everyone gets together for the Giostra del Drago (Tournament of the Dragon) – a costume duel that is more than 30 years old.

Once again this year’s king and queen and their noble friends gather in the Piazza del Castello to watch the three town districts, Il Borgo, Il Croce and Il Castello, battle it out for the crown and a year’s worth of bragging rights.

The last day of the festival is dedicated to children’s games and merriment all round. There’s sword fighting for the kids, dramatic reenactments, ancient artisan demonstrations and plenty of good food and drink. To be honest, there is never a dull moment during this festival and the music! The music is just incredible, even if it is a bit daggy!

I don’t think I can do this festival justice. I mean, I haven’t even mentioned the philharmonic orchestra that entertains you throughout the four days, the various themed dinners at the local restaurants, the different stalls and the fireworks that light up the sky on the final night.

But for me there is only one thing that really stands out and that’s the refreshments served in the Piazza del Castello every evening just before the band takes centre stage and the dancing starts.

It might not sound like much, but these refreshments are provided by Montemerano’s locals themselves. They bake cakes, serve up homemade cheese and different salamis, make biscuits and get bottles and bottles of different drinks especially for this event.

I can tell you that I have been to many a festival in the Maremma and beyond, and I have never seen anything so thoughtful. All the refreshments are free and there is plenty to go around. If that’s not a symbol of the town’s spirit and absolute charm, then I don’t know what is.