That said, this is one museum you do not want to miss. In fact, if you can only see one museum in Massa Marittima, see this one, you’ll be blown away.

One of the first things to greet you as you enter the museum is the model of an Oreopithecus fossil on display on the first floor.

An Oreopithecus is an extinct primate from the Miocene epoch whose fossils have been found in Tuscany and Sardinia. It’s not believed to be an early form of man, but a species that grew alongside homo sapiens, but never fully evolved.

The one on display here is only a casting of the actual fossil, which was found in a mine in nearby Montebamboli. The real fossil is on display in Florence, but this casting is accompanied by some fantastic informational panels in English and reconstructions (like the one in the above picture) that give you an idea of prehistoric Massa Marittima.

From here, the museum moves chronologically through the history of the area.

The Eneolithic Period (3,000 BC) is particularly interesting as there are objects on display that you will not see elsewhere in the Maremma. The mines and minerals around Massa Marittima have been drawing ancient civilisations to the area for millennia, and they left plenty of amazing things behind for modern museum visitors, including a one-of-a-kind stone stela. 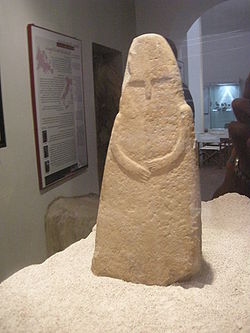 Carved more than 3,000 years BC, this stone flint bears a striking resemblance to a little man and was found in the Vado all’Arancio. The stone stela was made by a civilisation that is virtually unknown, but is thought to have also lived in Corsica and sections of France. This civilisation predates both the Etruscans and the Romans.

The top two levels of the museums are dedicated entirely to the Etruscans from the nearby Lago dell’Accesa. Most of what’s on display has been taken from tombs and includes ceramic plates, statutes, weapons, jewellery and other devotional materials. There are also some beautifully built plastic models of Etruscan homes and tombs.