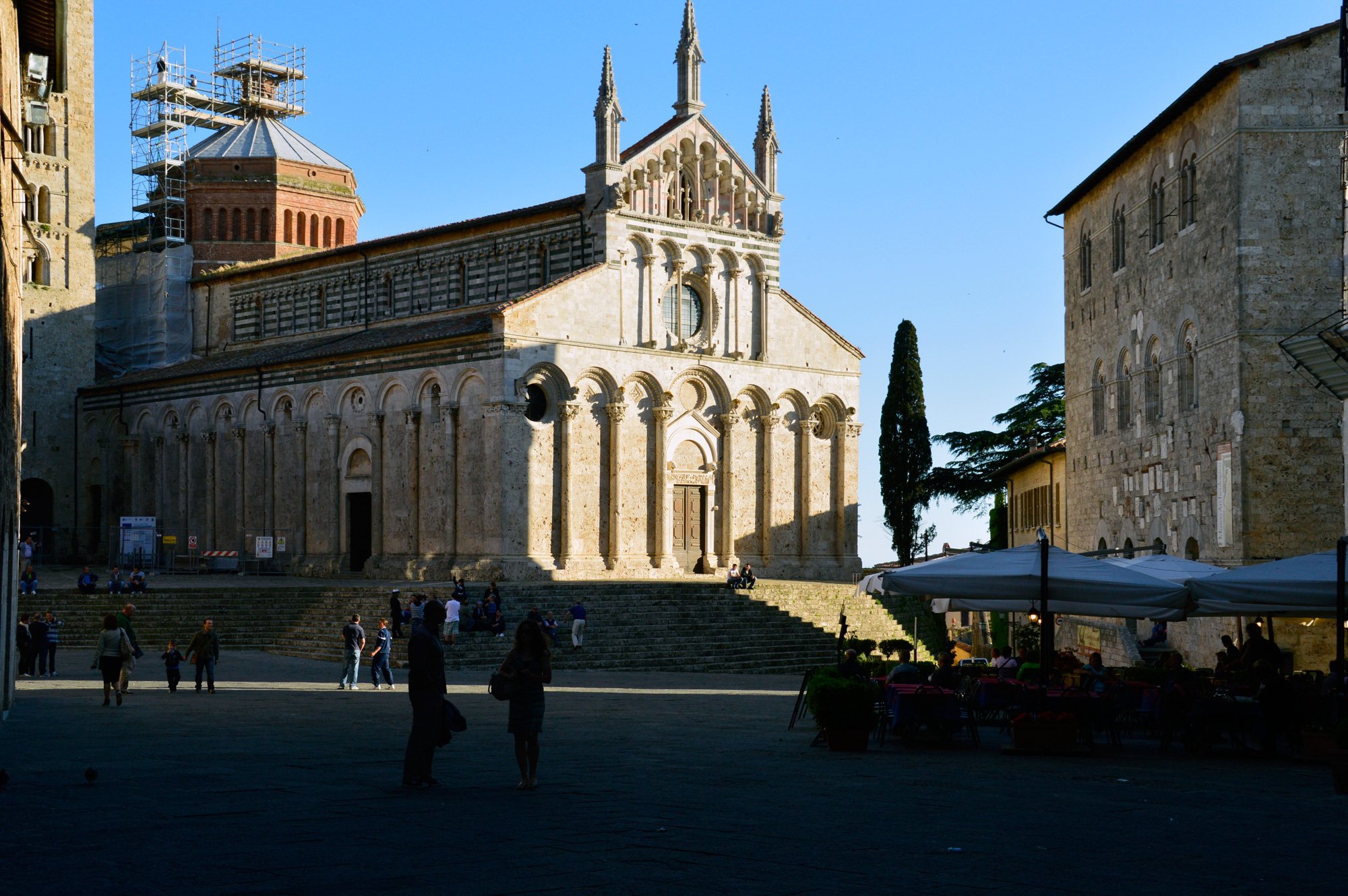 The Cathedral or Duomo of Massa Marittima is truly the heart of this medieval city. Dedicated to the city’s patron saint, St Cerbonius, it’s a masterpiece of marble, inspired by the venerable Duomo di Pisa, the church next to the Leaning Tower of Pisa.

Massa Marittima’s cathedral is a testament to all the different cultures that have ruled it. The lower section of its facade with its circular openings and the median loggia reflect the Pisan Romanesque style that dominated in the early Middle Age, while the large four-pointed ogival arch is a later Sienese addition.

The exterior facade is enough to inspire the awe that surrounds this church. You might not believe me, but people actually line up in droves to see inside Massa Marittima’s cathedral. As far as I know, it’s the only church in the Maremma that has such a tourist following.

The beautiful marble facade was built over the centuries from about 1225. The church was commissioned to mark Massa Marittima’s independence, even if it was later altered by other ruling states. The grand main facade is flanked by two lion heads right at the very top of the cusp (the triangular section of the facade). The three columns between these lions are supported by statues of a bearded man, a griffin and a horse. These statues are copies. You can see the originals in the city’s museum of sacred art.

Right above the sumptuous wooden doors is a strip of stone carved with panels bearing stories from the life of St Cerbonius. These include the trips the saint made through the Maremma with his African companions. To the side of the church, on the upper section above the side door (where you enter) is a series of blind arches decorated in the two-toned marble design you might recognize from the Duomo of Pisa.

The tower next to the church was rebuilt in the 1900s, but retains the apse and large pointed windows that were added by the Sienese under the guidance of Giovanni Pisano, who also sculpted the three statues of the man, horse and griffin. 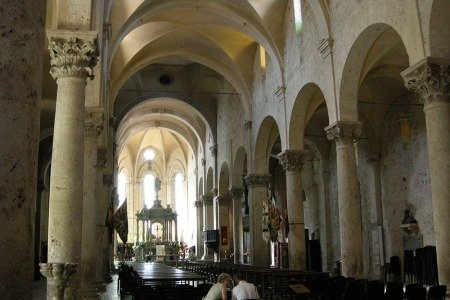 It’s a strange sensation to leave the magnificent exterior facade behind and enter the rather austere church. The interior is divided by three naves, marked by cylindrical columns and pilasters. Each of these columns is topped by a complex capital decorated with eagles in high relief. On one of the columns you can read the name, Enrico, who was probably the artist behind the columns.

The sheer size of the church overwhelms the few choice works of art that adorn its walls and floors. There something raw and medieval about the space, like the interior of a stone castle rather than a cathedral. To the left of the entrance door is a 14th century fresco triptych with the Madonna and Child enthroned with Saints, below it is a 3rd century Roman sarcophagus

On the right side is a series of panels carved in soft stone, dating from the early Middle Ages. Above the panels, paintings of the Crucifixion (15th century) and history of St Julian (15th century) bring some colour to the otherwise austere wall.

Just above the altar is a rosette window of rare beauty made by the 15th century Sienese school. Again this depicts the stories of  St Cerbonius, together with the Redeemer in glory. On the left of the altar is a monumental baptismal font made up of two parts. The first is a rectangular bath with Deesis (Christ adored by the Virgin and St John the Baptist) and tales of  St Cerbonius and St Regulus made from one piece of travertine. Above that sits the font itself, shaped like a temple (1447). On a square pedestal above that is a statue of St John the Baptist. The Baptistery, as it is known, is the work of Giroldo by Arogno, 1267. 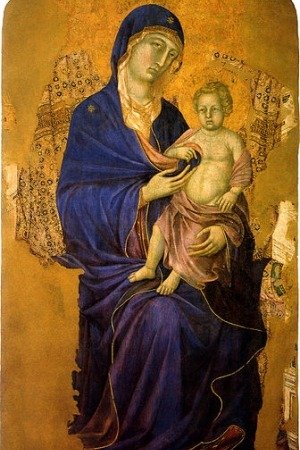 But the church’s principal work of art is the stuff of legends. It could easily claim to be the Maremma’s most beautiful and famous painting – The Madonna and Child by Duccio di Buoninsegna. This piece stands in the chapel to the left of the altar. Painted in 1316, it is breathtaking in its gold background with the figures of the Madonna and Child looking exquisitely wise, if not somewhat austere and masculine.

The coffin-shaped block of travertine behind the altar is the ark of  St Cerbonius by Goro di Gregorio (1324). There is something enthralling about this block of stone. I think it’s because it’s carved so fastidiously with scenes from the lives of  St Cerbonius and other saints and prophets. It’s amazing that they managed to produce something so delicate with such a rough block of stone.

Massa Marittima’s cathedral will blow you away. There are plenty of explanatory panels in English, just in case you want to know more about the art on display or the history of the church.