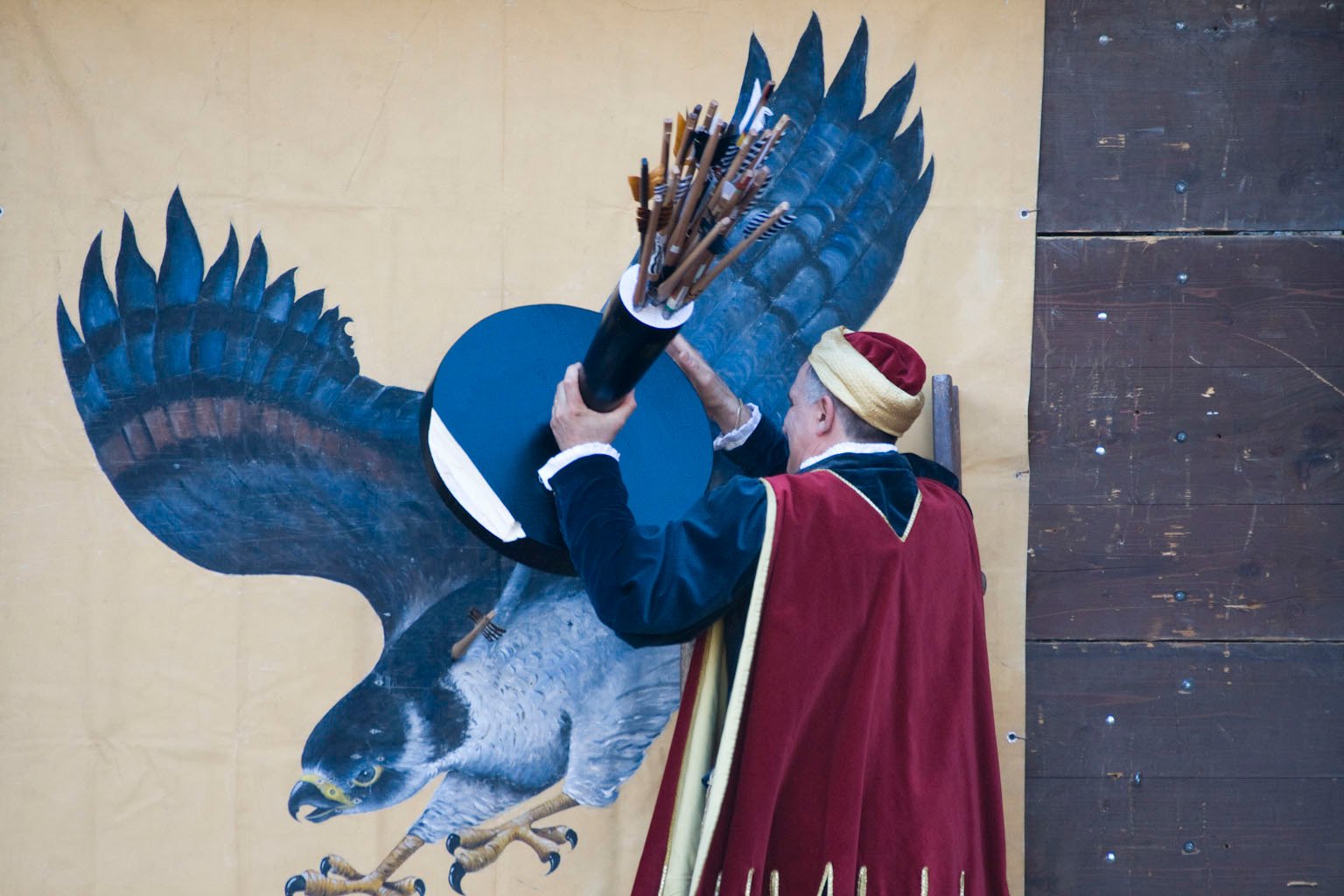 The Balestro del Girifalco is a major historical reenactment of medieval Tuscany, and a true treat for anyone who visits Massa Marittima when it’s on.

The festival is held twice a year, and is an archery competition between the three neighbourhoods of the city – Cittanuova (white, red and green), Cittavecchia (white, black and yellow) and Borgo (yellow, gold, blue and red). The competition is meant to be a bit of fun, but the rivalries between the neighbourhoods is more than a century old and everyone wants to see their colours win!

But the event isn’t just a show of masculine archery prowess. Before and after the competition, more than 150 people dress up in medieval costumes to represent the different neighbourhoods of the independent Massa Marittima. There are flag wavers, musicians playing traditional Massetani music and plenty of medieval games.

When the competition starts in the 13th century Piazza Garibaldi, you could be mistaken for thinking you’d stumbled onto a film set or even been transported back to the Middle Ages. The piazza itself has changed very little since then and the Massetani go to such lengths to create a historically realistic and fun atmosphere that you’re immediately caught up in the magic of it all.

The Balestro itself involves two fundamental stages. The first is held on the Saturday before the actual competition. On this day, there is a draw in the Town Hall that decides the order of the archers. Usually the neighbourhood that is lucky enough to shoot first holds a considerable advantage and everyone from that area can be heard celebrating long after the draw is done.

The next day, everyone in Massa Marittima is up early, ready for the archery competition. The day begins with a parade through the historic streets and towards Piazza Garibaldi. Colourful and incredibly loud, this is the best part of the day, especially for the young children, who line the streets looking to touch the god-like archers who will represent their neighbourhood. The flag-wavers of Massa Marittima are renowned in the Maremma for their skill and artistry. They definitely put on a show amid the bursts of trumpets and rolls of drums. Already there is a sense of majesty about the day, and the competition hasn’t even started yet!

As the herald announces the archers, the crowd roars their support. The ancient crossbow used is called a balestro and is tailored to suit the archer. It takes considerable skill to use the 15th century weapon. Their target is a dogwood circle 36 metres away. The team that gets the closest to the pallino or the centre of the target wins the competition and the Palio or Drappellone – a silk painting by a local artist. The winning team also gets a symbolic golden arrow and, of course, boasting rights for the rest of the year.

The Balestro del Girofalco isn’t a festival for tourists. Like the Palio di Siena, it is one of the most important days of the year in Massa Marittima. Sure it’s an excuse to celebrate and party on the streets, enjoying fantastic medieval-inspired food and music, but it’s also an essential part of the local culture. The event is more than 100 years old – that’s a lot of history – and many modern Massetani identify themselves by their neighbourhood. There is some serious pride that comes from belonging to the winning neighbourhood and every young boy wants to one day shoot in the competition.

For tourists, it’s a once-in-a-lifetime chance to be part of a festival that is full of life, colour, fun and history. It’s not often that you get to experience a century old tradition, and you really won’t be able to resist getting caught up in the experience, picking your favourite neighbourhood and cheering along as they fight for the golden arrow!

For more information, check out the official festival website.