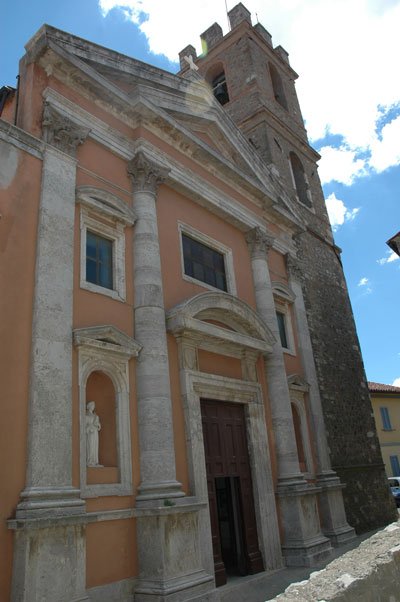 Manciano‘s offering to its patron saint, St Leonardo, this church was built sometime during the first half of the 14th century in a Romanesque-Gothic style.

Over the following centuries, it, like most of the churches in the area, had a series of face lifts that completely altered its original appearance.

None were more drastic than those undertaken in the 18th century though, when the entire structure was almost rebuilt to make the church bigger and better.

Today the facade of San Leonardo is divided by two columns and two pilasters carved out of a striking white marble that’s local to the area. The two strong wooden doors are flanked by statues of saints and above them are beautifully framed square windows.

Inside the church is divided into three naves. Aesthetically it’s pretty modern, until you get a look at the artwork.

Manciano’s most beautiful and precious works of art are housed inside this church and include a lovely 14th-century baptismal font carved out a rich and mottled traventine rock, also locally sourced.

But the church wouldn’t be as magnificent as it is if it wasn’t for local celebrity and painter Paride Pascucci.

Pascucci worked tirelessly to produce the epic and emotion-wrought religious works that adorn almost every wall of San Leonardo. Keep an eye out for his painting of the patron saint St Leonardo himself, it’s quite simply a masterpiece.

The church is also home to one of the region’s most elaborate and famous nativity scenes. So if you’re in Manciano during December, definitely stop by and admire the lights, music and movie that bring this nativity scene to life.