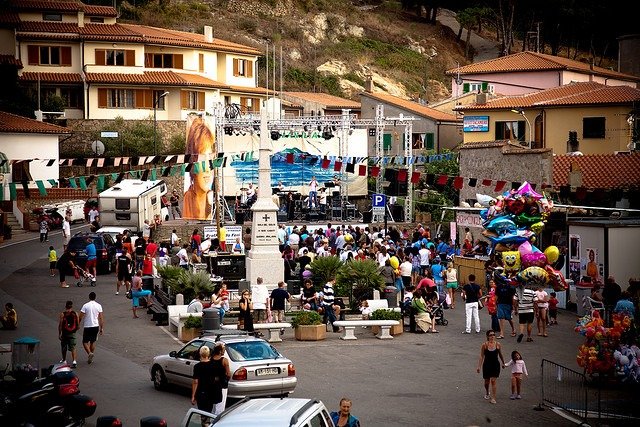 Middle of September, around the 15th

The Festa di San Mamiliano started as a celebration of Giglio Island‘s patron saint, St Mamilian, but has become a massive week-long party that includes everything these islanders love about their home.

While the finer details of the festival change each year, you can be sure that the 15th, St Mamilian’s saint day, will start with a mass and procession around the island. The procession is a beautiful thing to witness as long as you don’t have to carry the massive statue, which weighs more than it looks. During the procession, the priest chants prayers and blessings for the island’s residents and its visitors.

During the rest of the festival, thoughts turn to food and dancing.

The locals are avid dancers and aren’t shy about showing off their moves. The traditional festival dance is the quadriglia (quadrille). It’s an older, more classy version of square dancing that’s not the easiest thing to pick up. Younger visitors don’t despair though, there’s always a DJ set later on in the festival.

In between all the square dancing is the annual Sagra del Coniglio. Expect rabbit prepared many ways. My favourite is with a tomato sauce that’s thick and luscious.

If you’re not already a little overwhelmed, I should mention there are also kids games and fireworks and orchestra performances and lottery draws and the event that everyone always looks forward to – the Palio Rionale degli Asini.

Forget horses, on Giglio Island, they race donkeys. Yep, four seriously well trained donkeys and jockeys represent the districts of Casamatta, Centro, Cisterna and Rocca in a race that’s more than 60 years old. I’ve seen a lot of palios in the Maremma and none of them are as fun as this one.

The Festa di San Mamiliano is not one festival. It’s at least five rolled into one. It’s like a little slice of Carnevale in September and plenty of fun for the whole family.