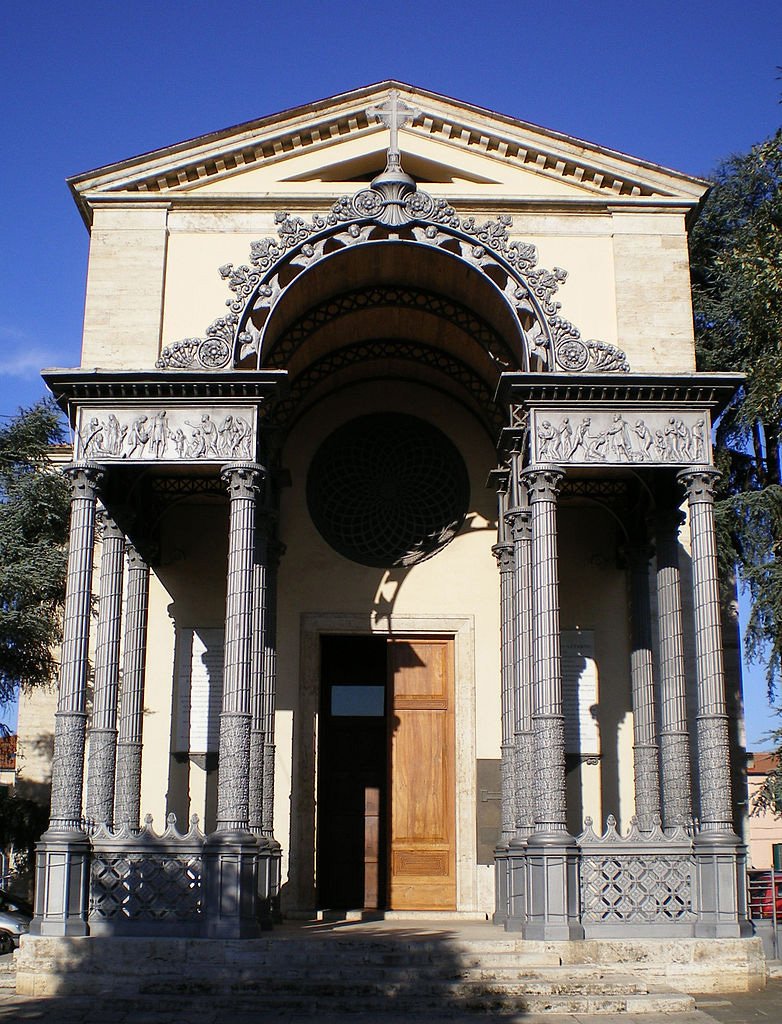 In 1836, the first stones of this church were laid, designed by Alessandro Manetti  and Charles Reishammer for the Grand Duke Leopold II.

Two years later the Chiesa di San Leopoldo was finished and named after the esteemed Grand Duke himself. It differed from other churches in Follonica thanks to its, at the time, modern facade, which was shaped out of cast iron made by artists at the local foundry.

The church follows a Neoclassical design, like all of Follonica’s buildings, and has a beautiful iron porch. It’s this porch that earned the church the nickname “Chiesa della Ghisa” (Iron Church).

If you get up close, you can see the extremely detailed palm and cherubs motifs on the three columns of the porch. A lot of very talented artisans worked on these columns and they are truly masterpieces.

On either side of the porch are two more cast iron ornaments modelled by sculptor Lorenzo Nencini in 1841. They depict St. Leopold distributing goods to the poor (on the left, he’s delivering bread and on the right, he’s handing out clothes).

Inside, the iron embellishments continue on the base of the pulpit, on the balustrade of the presbytery, on the supporting columns in the apse and on the beautiful candelabra that adorn either side of the main altar.

But the church is not just made of iron. It also has some striking marble and pearl detailing and an array of beautiful paintings and statues.

To be perfectly honest, I first visited this church because I have never in all my travels seen anything like it. The Italians do’nt normally use iron to built their churches, but if this incredible one is anything to go by, they should.

The sheer artistry that went into carving all the iron work has to be seen to be believed. Iron must be a lot harder to work with than your basic canvas, and yet the figurines depicted are no less expressive.