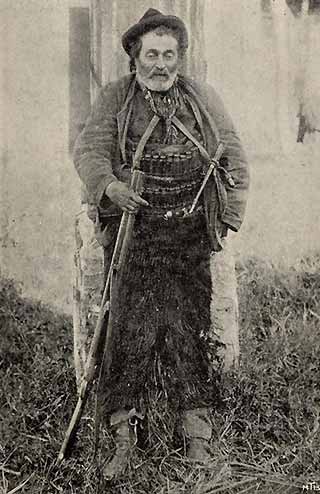 This picture of the Maremma’s most famous brigand was actually taken posthumously, just outside of Capalbio‘s cemetery.

He was killed in 1896 by the Carabinieri. In this picture he doesn’t look menacing at all. Instead he seems like a sweet old man dressed in the traditional outfit of a Maremman farmer.

But pictures can be deceiving. Tiburzi was a nasty man. He was born into extreme poverty in 1836. He grew up in an era when most of the Maremma’s population was made up of poor farmers who worked on farms they didn’t own. They would die young thanks to the malaria that was everywhere or from hunger, while their landowners grew fat and lazy.

Tiburzi was a young man who liked to brawl and it wasn’t long before he was a full time brigand. He stole from the rich and said he gave the money to the poor. Although it’s more likely he kept it for himself and his band of merry criminals.

Tiburzi quickly became a cult figure among the poor. Whether or not he shared his bounty with them, he represented resistance. He was standing up against the rich and the corrupt government officials and police that supported them.

Tiburzi was a cheat and a murderer, but he was also a symbol of freedom and of fighting back. Even after his death, Tiburzi remains a cult figure and a symbol to many of the Maremma’s modern residents.

You can see a plaque dedicated to Tiburzi at the site where this photograph was taken, which is in Capalbio’s cemetery, just outside of town.[/vc_column_text][/vc_column][vc_column width=”1/4″][templatera id=”10223″][/vc_column][/vc_row]