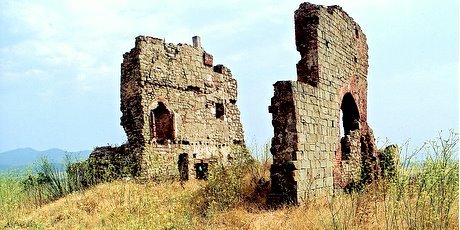 On the road that takes you from Grosseto to Castiglione della Pescaia sits Isola Clodia.

Once surrounded by the Prile Lake, Isola Clodia is today little more than a hill surrounded by a few centimetres of water. It might not sound much, but the island’s story is incredible.

It was once a key Etruscan port that was later taken over by the Romans. One clever Roman took advantage of the seizure and built a private villa on the island. What followed is the stuff of bloody legends.

According to the story, Clodius, a Roman senator, was breaking the law when he built his villa on the private property of the soldier Paconius.

During this time, the island was seen as a nice getaway from Rome and was highly coveted. Enraged by Clodius’ transgression, Paconius hired Milo, son of Sylla, to kill Clodius in 53 BC. Milo was later arrested and condemned to death, or so the story goes.

For a thousand years afterwards the island remained empty until the Abbazia di Sestigna built an abbey over the ruins of the villa.

Today the abbey (seen above) has been almost entirely destroyed, but the island, whose surrounding lake was drained years ago, still draws visitors both for its mysterious legend and for the incredible views that can be seen from the top of the hill.