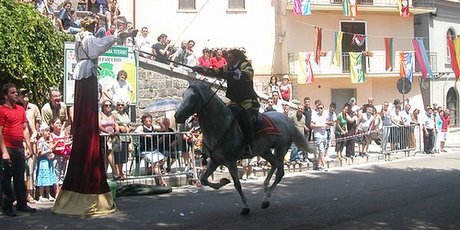 This horse race was first held on 8 September 1402 when the Republic of Siena ruled Castel del Piano. The palio was run sporadically after that and was made an annual event in 1968, but this start date makes it one of the oldest palios in Italy.

A ‘palio’ is a banner or cloth won during some type of traditional race or contest, in this case, a very ancient horse race. Castel del Piano’s palio is run in honour of the Madonna della Grazia, who is the patron saint of the town.

The race is tied to a legend that dates back to 1430 and is said to have been inspired by four soldiers from Castel del Piano who fought in the Sienese army.

One day before a big battle, the four soldiers were praying when the Virgin Mary appeared to them, warning them of the imminent arrival of the enemy. Heeding her warning, the four soldiers took their icon of the Madonna and ran, hiding in a small chapel located just outside of Castel del Piano.

In today’s palio, the four soldiers are represented by Castel del Piano’s four town districts – Monumento, Poggio, Storte and Borgo. The race is held in Piazza Garibaldi, whose shape mirrors that of the shell-form of the Piazza del Campo in Siena. During the race, the different districts fight to seize the palio and take it back to their part of town. The team that succeeds wins.

But the Palio delle Contrade isn’t just about the horse race. There is also music and food, historical reenactments, people parading in medieval costumes and story-telling. It’s an opportunity for the entire town to come together and celebrate their heritage and traditions. There is quite simply no better time to experience the true Castel del Piano in all its ancient charm and beauty.