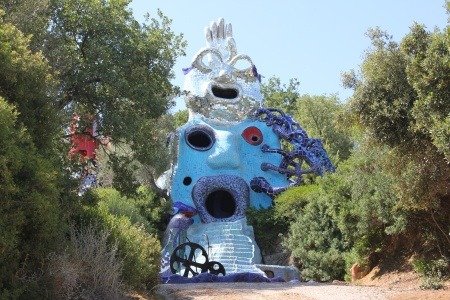 A living, breathing work of art, this garden was created by English-French artist Niki de Saint Phalle with the help of her husband and a number of other artists. Together they spent 20 years creating this masterpiece!

Strangely serene, seeing as though it’s just outside bustling Capalbio, this beautiful garden is filled with native plant species, so there is always something in bloom no matter when you visit.

But this isn’t just an ordinary garden.

Spotted throughout the shrubs and plants are statues representing the 22 tarot cards. Decorated with hand-cut mosaics of stones, mirrors and coloured glass sparkling in the sunlight, these statues are striking not only for their eccentricity, but also for their immense size – in some case they are 15 metres tall! 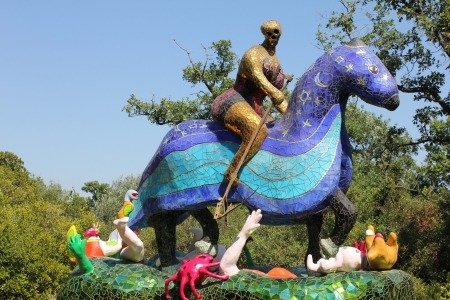 The garden does not have a predefined footpath. You’re encouraged to seek out your own footpath, deciding on a whim whether you want to admire the The Priestess, The Sphinx, The Pope, The Prince, The Sun or the other statues first.

Niki’s sculptures are heavily influenced by Spanish architect Antoni Gaudi’s Park Guell in Barcellona. They both use the same bold and bright mosaics and both gardens have a heavy modern art air about them.

Niki’s garden is now one of the most important examples of environmental art in Italy.

Shortly after its completion, Niki set down her aspirations for the garden, insisting that it would serve as an example of how art should be conserved in Italy and should always remain a place for meditation and philosophising. It’s also a great place to take children, who will be fascinated to no end by the glittering mirrors and hidden rooms inside some of the sculptures.

One sculpture, the Emperor, is actually built like a castle, with a beautifully decorated mosaic courtyard and steps that lead up onto a first floor terrace, where you can enjoy incredible views of the park. The garden itself is not big, contained on a small dusty hill filled with Mediterranean shrubs.

Be sure to wear closed shoes and avoid the early afternoon – this is when the sun is the hottest and is the crowds are at their worst.