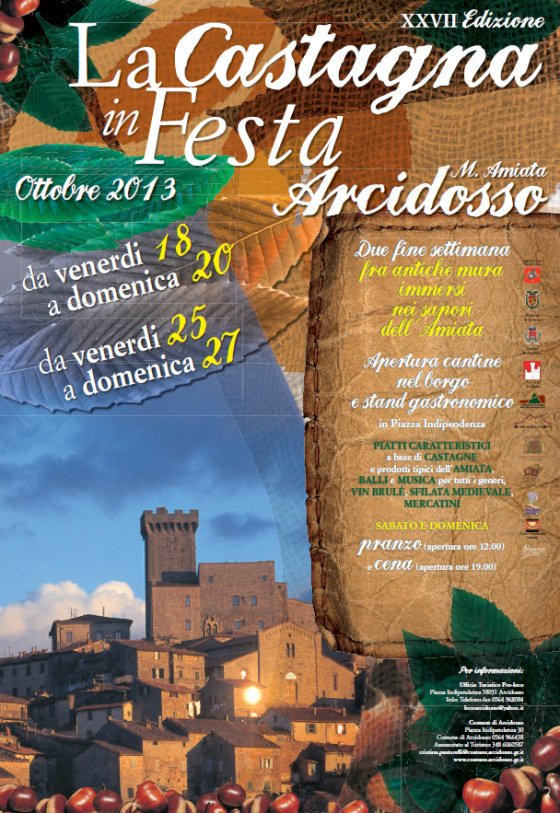 La Castagna in Festa is a much loved festival not only in Arcidosso, but in all of Monte Amiata. The event centres around the chestnut, which has achieved a god-like status in Monte Amiata – they’ve even built statues dedicated to the chestnut tree in a number of local towns.

Thanks to warm weather and fertile soil, the territory grows some of the country’s most coveted chestnuts. In fact, Amiata chestnuts are so good, they’ve earned IGP status – an award that’s only given to the best and most organically-grown Italian produce.

During the festival, held in Autumn (prime chestnut season), you’ll find the customary traditional music and dancing. But there’s also a fashion show, artisan stalls, an antiques market and historical reenactments in the fortress and at the heart of medieval Arcidosso.

And then there’s the abundance of chestnuts and not just by themselves. They’re used to make chestnut beer, chestnut bread and whole host of other delicious dishes local to this part of the Maremma. You can even go on tours through the chestnut farms with the farmers themselves.

But if you don’t like chestnuts, don’t despair. There are stalls selling other local products and plenty of great wine to go around. To be honest, this festival really goes beyond the humble chestnut and has become for locals and tourists alike a celebration of everything that is loved by those who live in this territory and everything that makes this territory so great, from its history and culture to its food and party attitude.