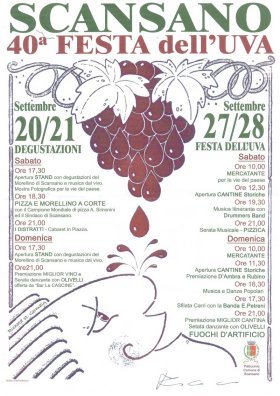 The Festa dell’Uva is the culmination of a month’s worth of wine-themed celebrations held in Scansano throughout September.

During this month, the entire town is transformed to host festival after festival, weekend after weekend. Not one weekend in September goes by without some sort of dedication to the Morellino di Scansano, usually accompanied by a series of wine tastings.

As a wine, the Morellino di Scansano is made from 85% Sangiovese grapes, which are allowed to fully ripen for a rich fruity flavour and solid structure. It’s reasonably priced, isn’t strong and has notes of black cherry and berries. It achieved DOC status in 1978 and was upgraded to DOCG in 1997.

The Festa dell’Uva is held during the second or third weekend of September and aims to not only offer everyone a chance to appreciate the quality of locally produced wines, but also learn about the growing and production process and meet the wine makers, many of whom have been producing Morellino di Scansano for generations.

During the festival, some of Scansano’s oldest and most distinguished cellars are opened to visitors, offering a glass of fine wine served with a number of snacks made with only the best local products and a healthy dose of history and tradition. This festival is simply perfect for lovers of wine and is the ideal opportunity to appreciate the extraordinary food and wine culture of Scansano, as well as admire the splendor of the town itself.

If you happen to in Scansano during the first week of September as well, don’t miss the Festa and Mercatino della Creatività.

Surprisingly not about wine, this festival includes a series of stalls and small markets that are set up around Scansano and sell locally made handicrafts. There’s music, clowns and, of course, delicious Maremman fare. The festival is so popular it has won numerous awards and is gradually becoming one of the most important in the Maremma.